Madge Geddis was a teacher at Stockton in the late 1950's and early 1960's, teaching 1st grade in her early years and later teaching 5th grade.

Below: Miss Geddis, a sophomore, in the 1953 Memorabilia, yearbook of New Jersey State College at Newark 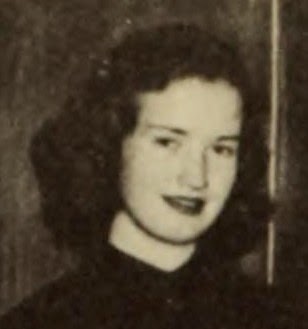 From Drew University, 2007:
"It’s the stuff of which legends are made—how a romance between a field hockey enthusiast in Northern Ireland and an American schoolteacher brought a world-class turf field to Drew.
Jake Speers, who had been captain of the men’s field hockey team at Queens University in Belfast, met Madge Geddis when she visited Northern Ireland. After two years of marriage there, they moved to Scotch Plains, New Jersey. While Madge taught school, Jake worked in advertising, public relations, and publishing, first in New York City and then in New Jersey. Jake’s daily commute to North East Publishing Company in Chatham brought him past Drew, where he saw field hockey games in progress.
Methodist connections through his work put Jake in touch with then-Director of Athletics John Reeves. The two became well acquainted when Jake became involved with Drew athletics, attending soccer games and singing the National Anthem at Rose City Classic basketball games. Ultimately he asked permission to use Drew’s athletic field for field hockey. Under a new Director of Athletics, Richard Szlasa, Jake’s group, the Eagles, played weekly at Drew. The Eagles grew rapidly, offering training and competition and involving local young people, including many from Madison.
Although the Rangers and the Eagles were both playing great field hockey, there was one thing lacking: an all-weather field. Interest in a turf field became intense when a snowstorm moved a scheduled Division III championship game away from Drew. Not long thereafter, the national men’s and women’s field hockey associations saw their share of the 1984 Olympics profits as a chance to promote their sport in the United States,. They were able to offer $1 million if a location for a turf field could be found. Jake’s connections with both hockey and Drew made him the perfect person to bring them together, and the $3 million field was completed only two weeks before the World Cup trials in 1989. The University still remembers the intense excitement when 12 men’s teams from around the world, and hundreds of their supporters, converged on Drew’s United States Field Hockey Center for a tournament that sent its top six contestants to the World Cup in Pakistan.

Jake, who is still closely involved with the Eagles (now the Eagle Spirit), and Madge have moved a few miles to Mountainside, New Jersey. Drew’s excellent turf field is used for several sports, and we are grateful for the opportunity that grew from an international romance."

Below: Miss Geddis in the 1940 census when she was six years old, living with her family at 61 Sunnyside Terrace in East Orange (in the Elmwood Park area near South Orange Avenue). Her parents are shown as being born in Northern Ireland.