In the 1950's I went to the Columbian Pharmacy every afternoon to buy a copy of the Newark Evening News so that my father could read it when he got home from work and, if Helen Grober, wife of one of the owners, pharmacist Max Grober, happened to have a prescription that needed to be delivered to one of the neighboring apartment buildings, she'd let me deliver it and the customer would always give me a small tip. 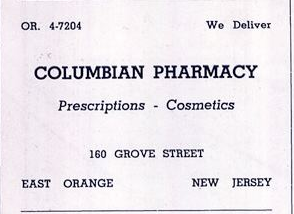 Above: from the 1954 East Orange High School yearbook

The Pharmacy was one of those places that could turn a densely populated neighborhood like ours into a "village" by being a stable, long-term institution with caring people like Max and Helen Grober and Moe Finkelstein helping raise the children of the area.

Every card or gift I bought for my parents during my childhood came from the Pharmacy, boxes of candy for my mother, pipes and tobacco pouches for my father, and Mrs. Grober always helped me decide and would put the item on layaway for me while I saved up my allowance.

In 1927 the commercial building that was the eventual home of the Columbian Pharmacy was built at the  NE corner of William Street and North Grove Street replacing homes that had been there many years. The neighborhood had suddenly become densely populated in the previous ten years with the addition of the Hotel East Orange and apartment buildings along Grove Street between the railroad and Park Avenue and along William Street near Grove. 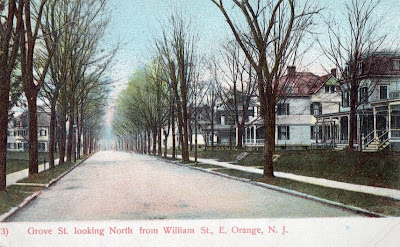 Above: North Grove Street about 1910 looking north from William Street toward Park Avenue. The two houses on the far right were the two closest to the NE corner of William and Grove and were torn down to make way for the commercial building built in 1927. 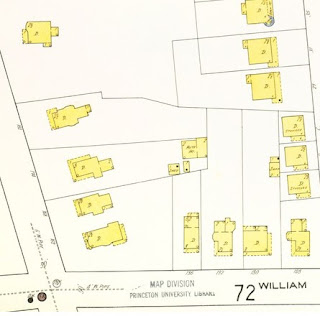 The corner location, 160 North Grove St, was first operated as the Pertz Drug Store by Boris and Jack Pertz, became the S&F Drug Store in 1929, and then finally the Columbian Pharmacy in 1934 operated by pharmacists Max Grober and Morris Finkelstein, who was married to Max's sister Ida.

Below: a 2013 Google Street-view of the building looking NE (Grove St on the left, William St to the right)

I urge anyone who has vintage (1927 to 1970) photos of this building or photos of the people involved in the businesses there  to get in touch with me.
Posted by Jeff S at 6:43 PM