Dr. Kenneth S Goodman was our family doctor during the 1950's. His home and office were a five minute walk from our house, and he made  house calls when I was home sick with the chicken pox and then mumps and then measles. At age 5 when I fell off (actually, pushed off by a "friend") of a brick backyard grill and hit my head, I was taken to Dr. Goodman's office for stitches. A few years later, when another "friend" hit me in the head with a garden trowel, I was taken to his office again, this time for a repair with some kind of clamps. And, for a while, I was taken to his office fairly regularly for nosebleeds that my parents couldn't stop. So, the good doctor was a regular part of my childhood and my parents and I were lucky to have a caring person like Dr. Goodman so close to our home.

Below: photo from the 1958 East Orange High School yearbook 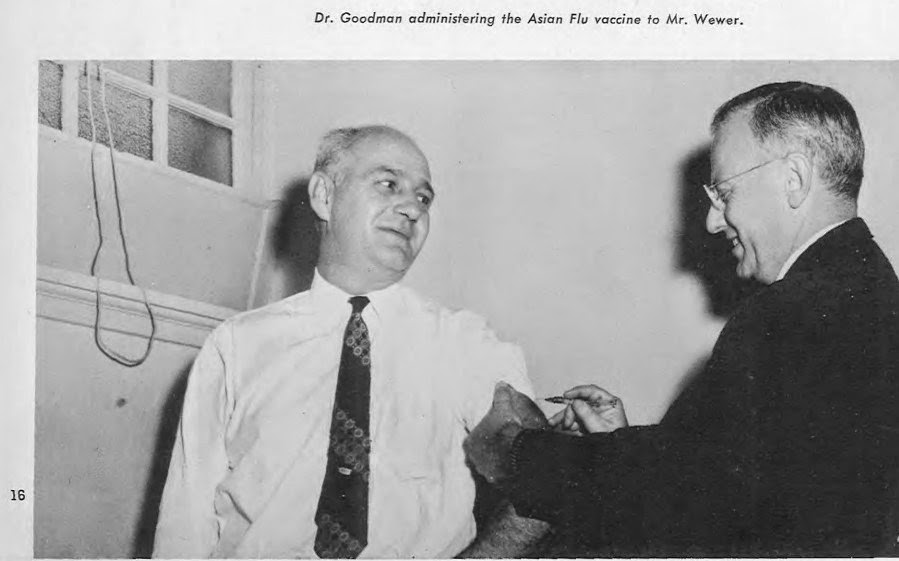 Another East Orange resident has written "Dr. Goodman made a house call to help my mother who was bleeding profusely from her nose. We lived on Hawthorne Avenue, four houses in from Main St., and he came from Park Avenue because our neighbor, Dr. McClellan, who lived across the street, refused to leave his patients in his office with the excuse that if he came out for one, he would have to do it for others! He told us to call Dr. Goodman, who did not hesitate to come out of his way, and I recall that he was very nice. That is something I could never forget!"

Kenneth Goodman was born in Pennsylvania, but by early childhood was living in East Orange at 344 North Maple Avenue (near Springdale Avenue). He graduated from East Orange High School in 1930 and was then a scholarship student at Princeton, graduating in 1934. At Princeton he was a member of The Triangle Club, a group which included Jimmy Stewart and Jose Ferrer at the time. He graduated from Columbia College of Physicians and Surgeons in 1938. During the 1950's his home and office were at 141 Park Avenue, the SW corner of Greenwood Avenue and Park Avenue.

From his daughter: "He interned at Kings County Hospital In N.Y. He was a captain in the Army during WWII and was stationed in Sydney, Australia in a MASH unit. He enjoyed belonging to the Masons. His most accomplished hobby was teaching himself to read, write and speak Ancient Greek. He loved to read while listening to WQXR the classical radio station. He took me to operas and Broadway plays. Swimming was one of his passions as well as golf. Wherever we went he had his camera with him; he just loved to capture the moment."

From Princeton Alumni Weekly:
Published in Oct. 8, 1997, issue
"Ken Goodman died at home in Livingston, N.J., May 22, 1997, after an extended illness. He was 84. Following graduation, Ken attended the Columbia College of Physicians and Surgeons and graduated high in his class in 1938, earning membership in the honorary medical society Alpha Omega Alpha. His postgraduate work was cut short when he volunteered for service in the Army Medical Corps, where he was among the first troops to deploy to the South Pacific. He separated from the Army in 1944 as a captain and returned to East Orange, N.J., where he established a medical practice that he maintained until he retired in 1992. In addition, he spent a number of years as an emergency room physician at Morristown Memorial Hospital. Throughout this period he pursued his love of the classics, and taught himself to read and write Greek. Ken always maintained a deep and abiding love for Princeton, and attended many reunions over the years. He is survived by his wife, Eileen; his children, Kevin Pyhel, Elizabeth Gorman, Ken, and Mary Ellen Carbone; and by five grandchildren.The Class of 1934"

Below: Dr. Goodman in the 1929 East Orange High Yearbook when he was a junior