Kentopp School came into existence about 1961/62 when Stockton School West (the separate building next to The Oval) became a kindergarten to 4th grade elementary school separate from Stockton. Kentopp had over 900 students in 1964/65. It's not clear at this writing if Kentopp included the Stockton School annex across the street. When Kentopp was formed, Stockton became a school with 5th to 7th grades and when Eastern School finally closed in 1965 its 7th and 8th grades were absorbed by Stockton using the Stockton annex.

J. Garfield Jackson became principal of Kentopp in 1962 making him the first African-American principal of a school in East Orange (another source goes further and says first "in Essex County").

Kentopp School was named for Henry Eugene Kentopp who had been East Orange Superintendent of Schools from 1936 to about 1960.

The school has recently had its name changed to the "Mildred Barry Garvin School."

Below: Stockton School West in 1959 shortly before it became Kentopp School 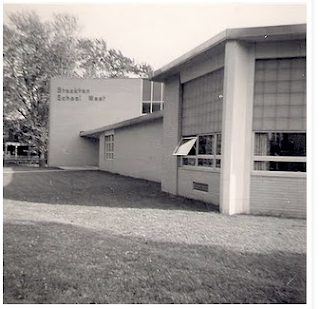