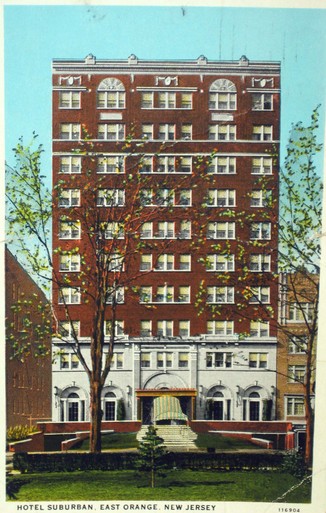 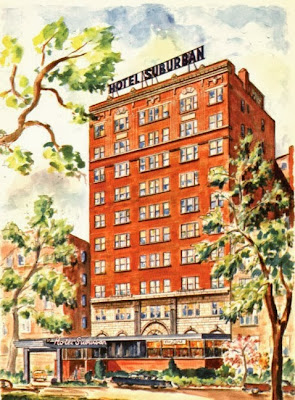 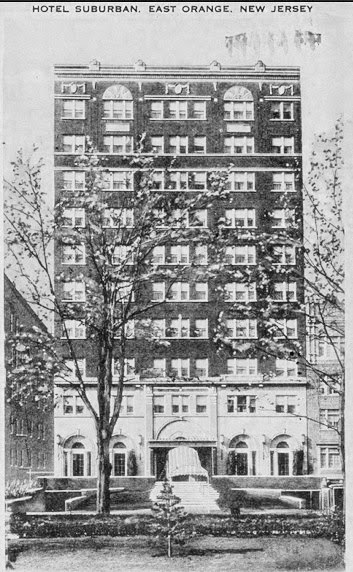 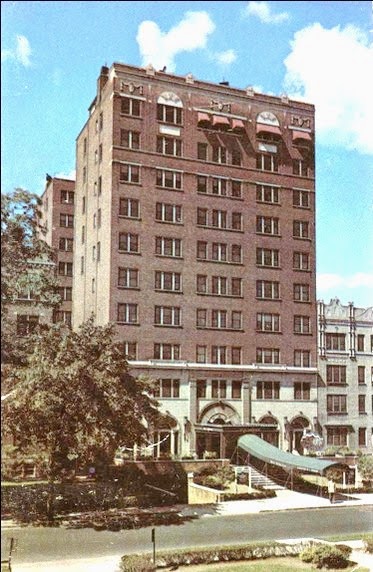 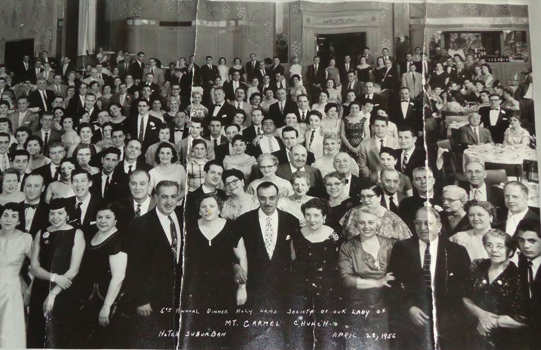 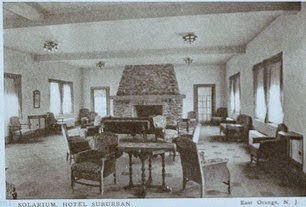 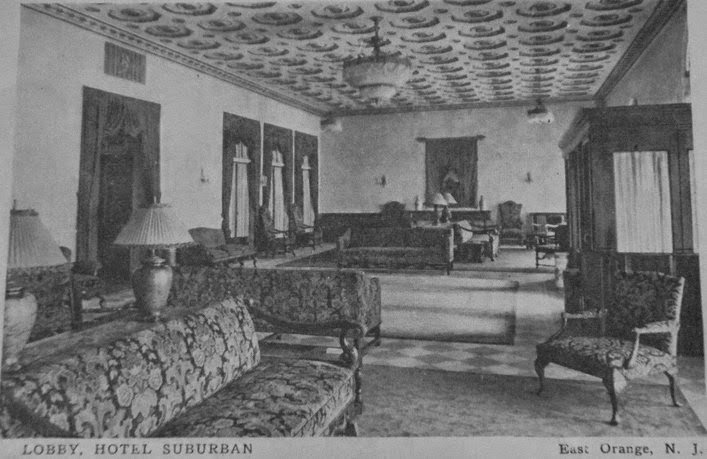 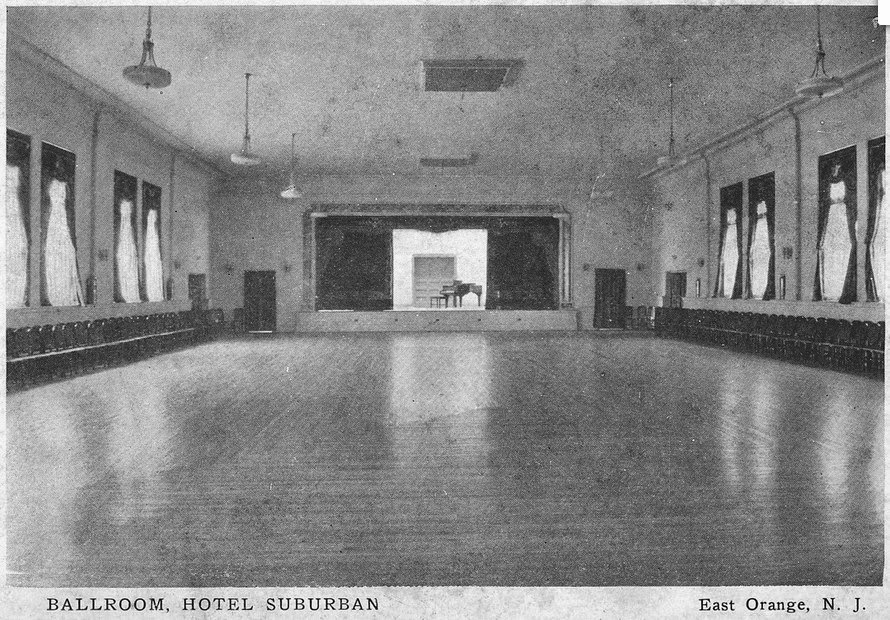 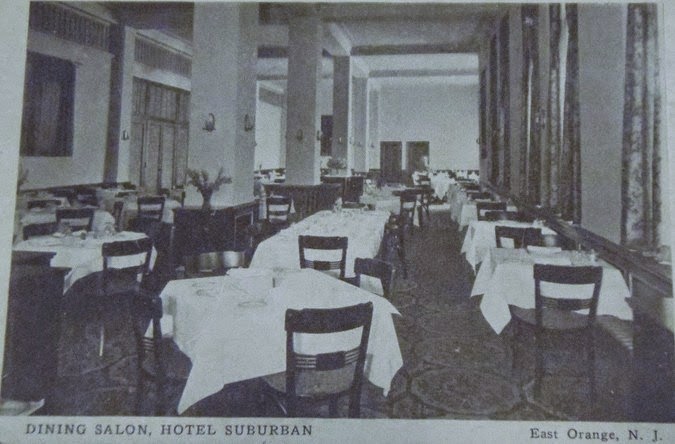 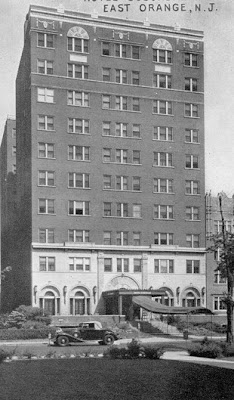 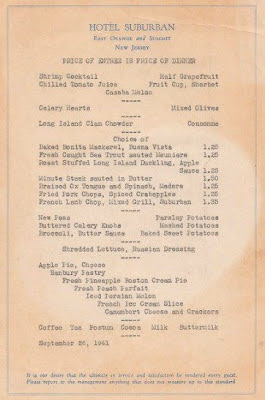 In February 1960 radio personality Dick Kollmar and his wife, columnist Dorothy Kilgallen opened up a supper club called Paris In The Sky on a newly created 11th floor in the hotel. The club featured a Paris street scene with six shops and touted its unique view of the Manhattan skyline just ten miles away. 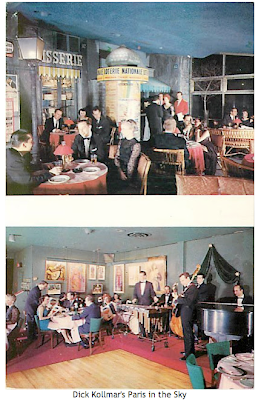 "Dick Kollmar spent $25,000 to reproduce a typical Parisian street, complete with six shops, on the glass-enclosed terrace of his new rooftop spot, Paris in the Sky, over in East Orange, N.J. But Paris never had such a view of the skyline of Manhattan." (From a newspaper column under the name Cholly Knickerbocker, Palm Beach Daily News, February 20, 1960, p.4) 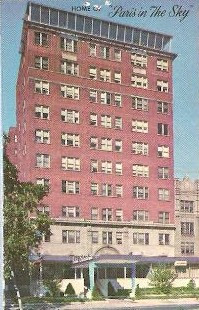 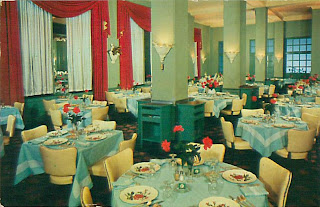 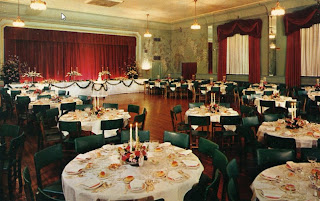 Above: The Rose Room 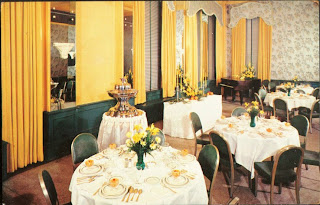 Above: The Mimosa Room

Below: The Crystal Room 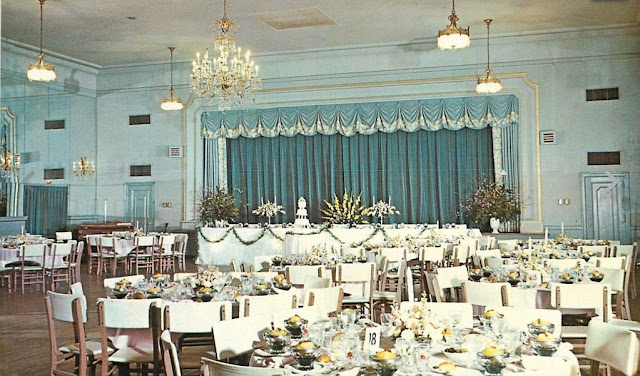 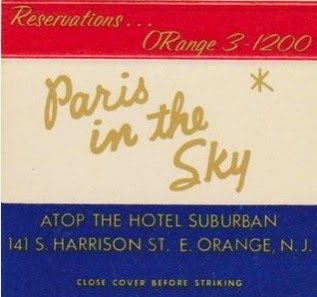 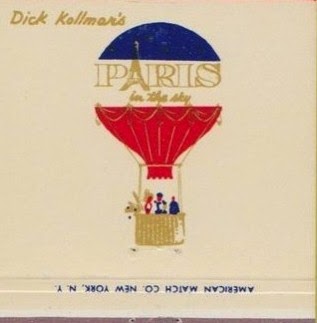 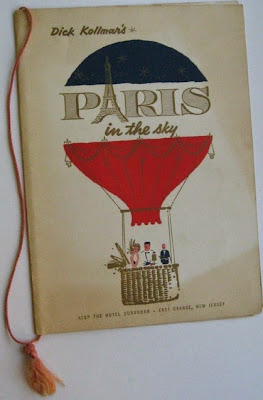 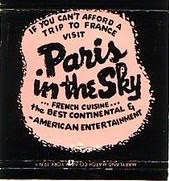 Below: an ad from the 1965 West Orange High School yearbook 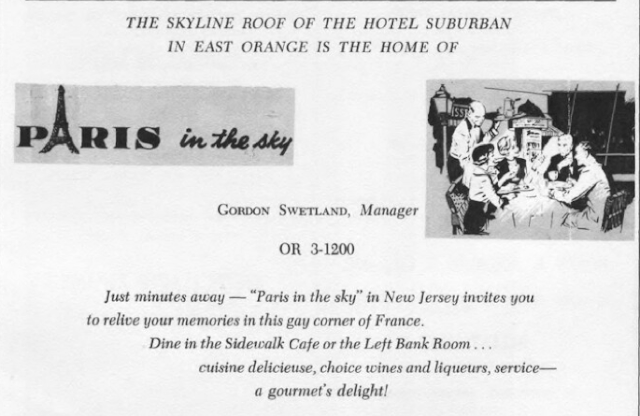 Below is from a March, 1960, syndicated NY gossip column carried in newspapers around the country:

"My New York By MEL HEIMER TV-NEW YORK--A party-goer, I am not. I could put up with them in my youth and indeed, occasionally I was the star attraction when, with four glasses of ginger ale under my belt, I recited all verses of The Highwayman. Now, in my dotage, I am inclined to shy like a frightened fawn when confronted by more than four persons in a group. However, I suppose the real reason I don't go to them In New York these days is that I'm tired of looking at other newsmen. By this time, we have exhausted our remembrances of stories we have covered and I no longer get snide Mel joined pleasure from muttering, "Hey, did you see the party, the dame giving this party? Looks just like an unmade bed." The other night, however, I broke the house rule and went up to Dorothy Kilgallen's and Dick Kollmar's East Side mansion for a cocktail joust celebrating the opening of Dick's fabulous, $500,000 "Paris In the Sky" restaurant in East Orange, N. J.-and it was a pleasure. To begin with, outside of Dorothy there weren't any other newspapermen there. I was ahead of the game right off the bat; THE PLEASURE WAS ALL MINE because the people looked so pretty. If I can drop a name or two, assorted souls such as Celeste Holm, Julia Meade, Madge Evans, Sidney Kingsley, Earl Blackwell, Gypsy Rose Lee, Ben Gazzara, Janice Rule and Candy Jones were there. They all looked as if they'd just hopped out of the bathtub. Stop hooting. Where you live, this may seem to be a small thing, but in grimy Manhattan it is not every day in the week that you run across such a gaggle of citizens who look so clean. Everyone was terribly well behaved and nobody walked up to someone else and said, "You know, I never did like you," and popped him on the nose. Now, I appreciate a good brawl as well. as the next man, but sometimes, after a hard day at the typewriter and the gin rummy table, it's nice to know that your fellows of the evening are going to be polite to one another. It Is too much to hope for, of course, that EVERYONE would be polite to one another. I noted that one celebrated former model went up to one celebrated singer and said, "You have mascara on your cheek," and the singer looked at her meditatively and said, "O. K., your teeth are crooked." But you know women. * * * * THERE WAS SMALL TALK, NATURALLY, because no cocktail party that ever was held was without small talk--but somehow, show-business people's small talk is so much more interesting than other people's. When the men gathered in little knots, they didn't talk about whether their Chevy got more miles to the gallon than Joe Doakes' Ford. And while they gossiped about people, of course, it was Big Gossip and the people they talked about were household names. Somehow, that seems to take a little of the edge off the curse of gossiping. I don't know why. I guess the most bizarre part of the evening was when everyone piled Into a couple of buses for the ride over to East Orange. There's nothing wrong with riding buses, except you don't expect to see Hope Hampton, Dorothy Kilgallen, Celeste Holm, etc., on them after you pay your 15 cents. I know I once rode down Fifth avenue in a bus with Yvonne de Carlo and, while nobody rushed up for autographs, it still seemed unnatural to me. Miss Y. de C. should be seen in nothing less than a Mercedes. Anyway, the people were pretty and the voices were kept low and everyone seemed to have a good time. Over in Jersey, they found "Paris in the Sky" to be as lush as touted, with a 68-foot terrace facing the New York skyline, a replica of an old Montmartre street and reproductions of six Parisian shops. Before the evening was out, however, I found myself talking newspaper talk with Miss Kilgallen. I suppose it figures. At least I didn't tell her I got more miles to the gallon with my Jag than she did with her Rolls." 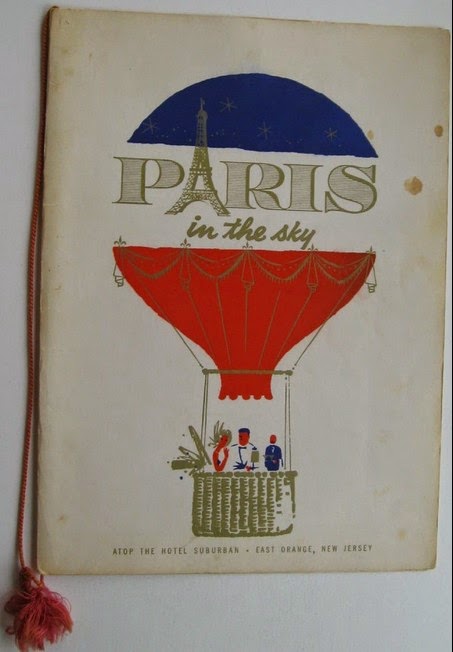 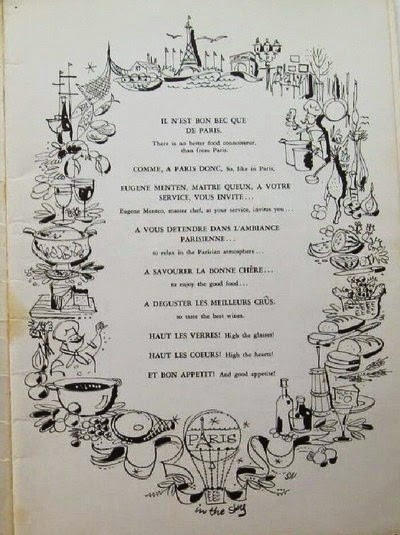 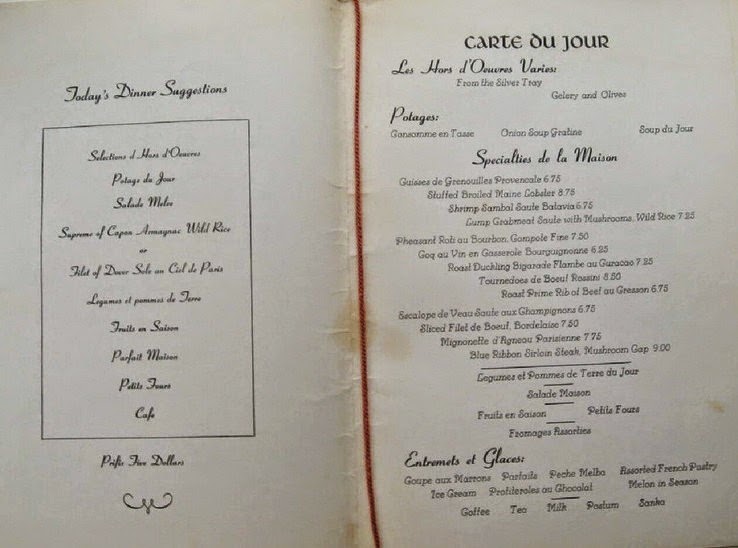 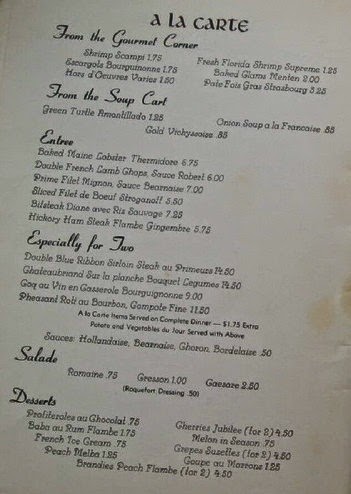 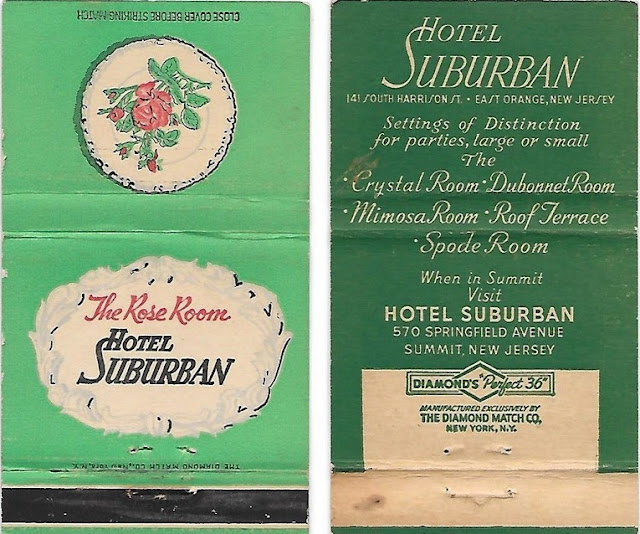 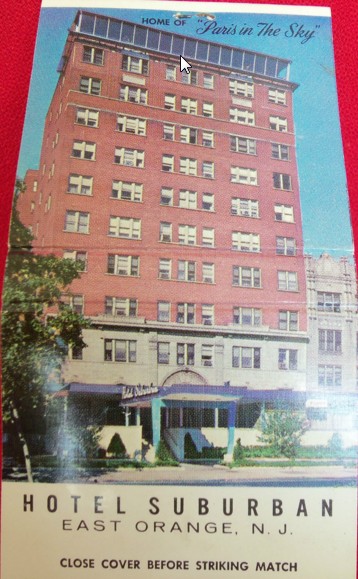 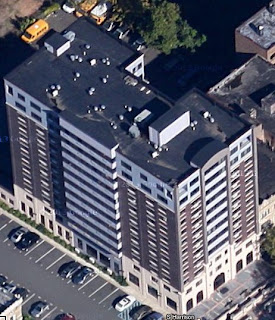 An article about the Hotel Suburban from the New Jersey Monthly. 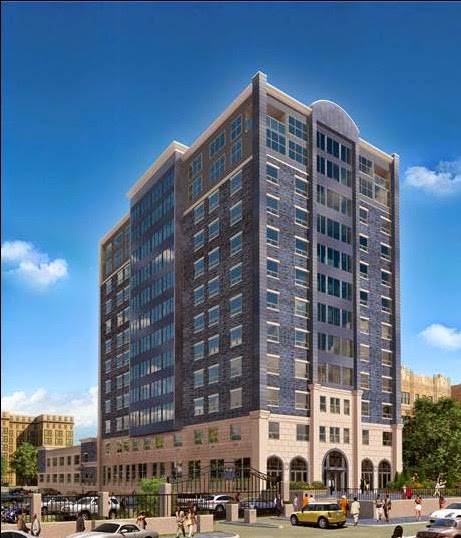