In 1951 Stockton students were introduced to Marty, a new crossing guard for the intersection of William Street and 19th Street. The introduction took place at a school assembly in what had just become the "new" gymnasium at Stockton, the 3rd floor of the 1905 building, which had served as an auditorium since 1905. In 1951 the Stockton annex had just been built behind the old building but the annex's new auditorium was not quite ready for use.

Officer Martin Huben had joined the East Orange Police Department about 1947 and would have been about 36 when he started protecting the Stockton kids in 1951. Former students remember him fondly: one writes that he was friendly and approachable,  one remembers the kids joking with him by shouting "hey, Marty, change the light!" and another student who knew him when he was at the intersection of Grove Street and 4th Avenue protecting students at Columbian and Our Lady of All Souls schools writes  " I remember a cop named Marty on the corner of 4th and Grove. He used to swing the little kids across the intersection if they asked."

Officer Huben retired from the East Orange Police Department in 1979 and and took a job as a crossing guard in Cranford as reported in the newspaper article below: 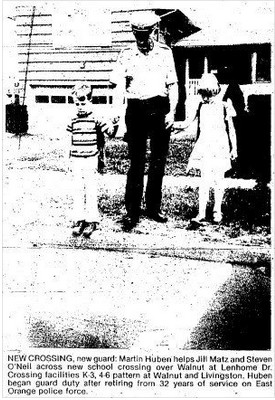 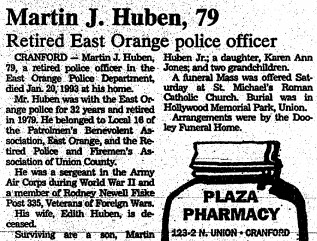