The Oranges and Newark: Secession and Talk of Reunification

The land that is now Newark and The Oranges was first inhabited by Europeans (by way of Connecticut) about 1675.  By the late 18th century the people living in the western part of the area had tired of traveling the five miles to Newark to do government business and had become wary of the voting power that the more densely populated Newark had over the more rural western area. The area split from Newark in 1806 and the small business area centered on Day Street and Main Street became the government center of the new town of Orange.

By the mid 19th century the process continued and the farmers and other owners of large tracts of land surrounding the Orange city center decided their interests were not being represented by the people living in "downtown" Orange, so South Orange, West Orange, and East Orange "seceded" from Orange between 1861 and 1863.

Ironically, many of the same  East Orange landowners, who in 1863 had objected to being part of the move in Orange toward developing property for a more dense population and for business and manufacturing, quickly followed the same path and within 40 years had surpassed Orange in population density. Some of this sudden change of attitude was probably the natural inclination to try to outdo the neighboring town by building better government infrastructure like schools, streets, and utilities. But, of course, the main reason was more likely the realization that the land had become much more valuable for houses and buildings than it had been as farms.

As The Oranges became more successful in the late 19th century, discussions started about possible annexations and reunification. There were fears that Newark would use its political power to begin annexing The Oranges one by one starting with East Orange. To preempt  that possibility some people suggested the Oranges reunify to form its own powerful town to avoid annexation with Newark. But most of the people who held political power in each of The Oranges did not want to lose what power they had and decided to take their chances with the status quo and one hundred and twenty years later Essex County (and New Jersey, in general) remains an area of tiny cities and towns.

Below is an excerpt from a full page article in the New York Times, 1895: 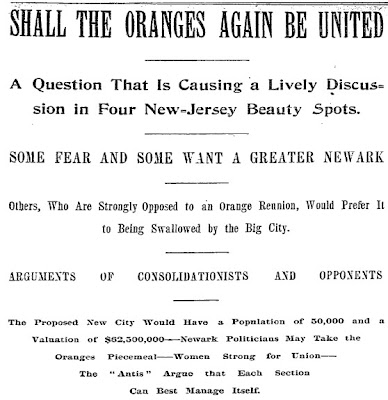 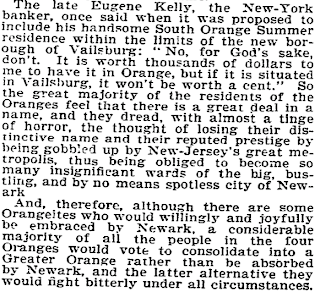