1) From I Love Lucy episode #109 "Lucy Learns To Drive," first aired January 3, 1955:
"Ricky: No, I may never drive again.
Ethel: You made a U-turn in the Holland Tunnel?! Oh, brother! That must have been somethin'!
Lucy: Yeah, the policeman said the cars were backed up all the way to East Orange, New Jersey!" 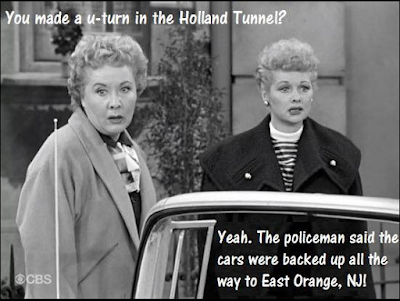 2) From M*A*S*H episode #41 "For Want of a Boot," first aired January 12, 1974
Captain Bernie Futterman:
"I know I'm Japanese.I was born Japanese.I have a feeling that I was kidnapped by a dentist whose wife was barren and spirited away to East Orange.My life there has only been prologue to my final destiny: Underwater dentist in an all-night bathhouse.".

3) In fiction, the protagonist of Philip Roth's Pulitzer Prize winning novel American Pastoral, Seymour "Swede" Levov, and his wife, Dawn Levov, are graduates of Upsala. The charactor Levov was inspired by the real person "Swede" Masin who attended Panzer College in East Orange.

4) The Human Stain is a 2000 novel by Philip Roth, and the protagonist is Coleman Silk, a 1944 graduate of East Orange High School. In the section below, at the novel's end which takes place in the late 1990's, Silk's sister reminisces about life in East Orange before 1955.


“In my parents' day and age, it used to be the person who fell short. Now it's the discipline. Reading the classics is too difficult, therefore it's the classics that are to blame. Today the student asserts his incapacity as a privilege. I can't learn it, so there is something wrong with it. And there is something especially wrong with the bad teacher who wants to teach it. There are no more criteria, Mr. Zuckerman, only opinions. I often wrestle with this question of what everything used to be. What education used to be. What East Orange High used to be. What East Orange used to be. Urban renewal destroyed East Orange, there's no doubt in my mind. They---the city fathers---talked about all the great things that were going to happen because of the urban renewal. It scared the merchants to death and the merchants left, and the more the merchants left, the less business there was. Then 280 and the Parkway cut our little town in quarters. The Parkway eliminated Jones Street---the center of our colored community the Parkway eliminated altogether. Then 280. A devastating intrusion. What that did to the community! Because the highway had to come through, the nice houses along Oraton Parkway, Elmwood Avenue, Maple Avenue, the state just bought them up and they disappeared overnight. I used to be able to do all my Christmas shopping on Main Street. Well, Main Street and Central Avenue. Central Avenue was called the 5th Avenue of the Oranges then. You know what we've got today? We've got a ShopRite. And we've got a Dunkin' Donuts. And there was a Domino's Pizza, but they closed. Now they've got another food place. And there's a cleaners.  But you can't compare quality. It's not the same. In all honesty, I drive up the hill to West Orange to shop.. But I didn't then. There was no reason to. Every night when we went out to walk the dog, I'd go with my husband, unless the weather was real bad---walk to Central Avenue, which is two blocks, then down Central Avenue for four blocks, cross over, then window-shop back, and home. There was a B. Altman, A Russek's. There was a Black, Starr, and Gorham. There was a Bachrach, the photographer. A very nice men's store, Mink's, that was a Jewish, that was over on Main Street. Two theaters. There was the Hollywood Theater on Central Avenue. There was the Palace Theater on Main Street. All of life was there in little East Orange..."

5) Bob Dylan wrote a song called Talkin' New York in which he described New Yorkers' derisive reactions in early 1961 to his performing style and he ended the song with a humorous allusion to his time in East Orange combined with his Midwest trip:
"So one mornin’ when the sun was warmI rambled out of New York townPulled my cap down over my eyesAnd headed out for the western skiesSo long, New YorkHowdy, East Orange"
He also wrote a satirical monolog called East Orange, New Jersey about his experience at a coffee house, The Cave which was on Main Street in East Orange near the SE corner of Main Street and Halsted Street:


First time I ever worked in East Orange, New Jersey --
Folks, never go to East Orange, New Jersey,
It's a horrible town.
I once had to play in a coffeehouse out there.
It was so bad -- uh -- so bad,
People playing chess out there -- uh --
It's all they thought about
Was chess 'n' chess 'n' chess.
People come up to me
You play a song, you play a real quiet song
In the middle of the song ya hear "check"
And "Hey, that was a good move"
And all kinds of stuff like that.Yes, folks, it was so bad I had a little dream out there
The first night I worked,
About this chess playing stuff.
I dreamed I went to work out in East Orange, New Jersey,
And -- uh -- about the time I quit in two days
I went there to ask the guy for my money,
"I worked two days for you"
He says, "Uh, well, o.k., we don't pay money around here, though."
I says, "Uh, yeah?" He says, "Uh, well"
He says, "Uh, we pay chessmen."
I said, "Uh, well, gimme my chessmen then. I worked for two days."
I was sort of -- didn't really figure --
I thought he was lying at first,
But I took it anyway.
He gave me a king and a queen for working two days.
I says, "Uh, fine, that's o.k."
So I took my king and queen, went down to a bar, the nearest bar I could find.
I walked in the bar and ordered a pint.
Down the bar, the bartender,
I says, "Can I have a pint?"
I'll be damned, he give me a pint.
He asks me for the money,
I gave him my king and queen.
I'll be damned, he took that king and queen,
Threw it under the counter,
And brought me out four pawns, two bishops, and a rook for change.
Little story about East Orange, New Jersey.


More about Dylan's time in East Orange and performance at The Cave
Posted by Jeff S at 2:52 PM