Born in 1940, Marie Dionne Warrick (later "Warwick") grew up on Sterling Street in East Orange on the other side of Main Street from The Oval, just a few blocks from Stockton School. She was born at Orange Memorial Hospital (as was my brother Drew) and attended Lincoln School* (also just a few blocks from her home) which was on Central Avenue across from the entrance to Holy Sepulchre Cemetery.** Her family consisted of mother Lee Drinkard Warrick, father Mancel L Warrick, sister Delia ("Dee Dee"), and brother Mancel, Jr. ("Pookie"). They first owned a two-family home at 46 Sterling, then moved to a larger home next door at 44 Sterling. 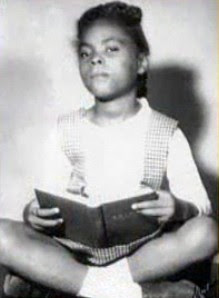 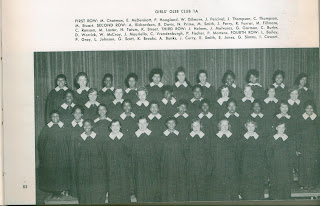 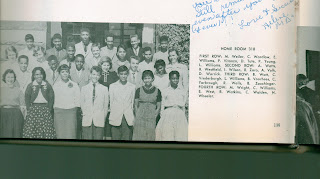 Miss Warwick has written "For me, Sterling Street was like living within the United Nations—every race, creed, and color lived on that street. We all walked to school together and had sleepovers at everybody’s homes. We did everything normal children did at that time: We rode bicycles, skated. We played tennis and baseball and kickball and dodgeball—all the ballgames you could play. That was at Oval Park in East Orange, which is still there." 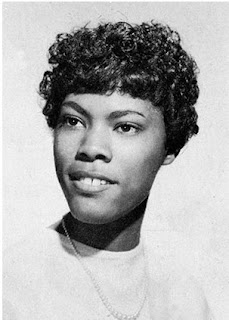 *since renamed the Dionne Warwick Institute of Economics and Entrepreneurship.

** My great, great grandmother Mary Ann Reilly Smith, great grandfather Charles Henry Smith, and  grandfather William Henry Smith are buried at Holy Sepulchre along with other assorted Irish-Catholic relatives. They all lived in the Chambers Street neighborhood of the "Down Neck" section of Newark.

Biographical info and quote are from Dionne Warwick's autobiography, My Life As I See It, and from NJ Monthly, November 15, 2010. 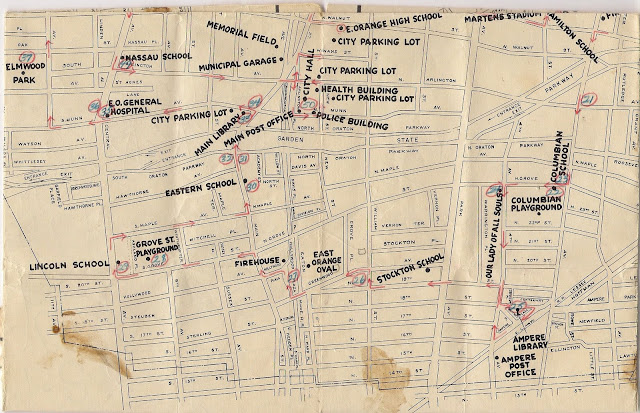 This portion of a circa 1955 East Orange map has Sterling Street in the lower left corner and shows how close The Oval was to Dionne Warwick's home. Living on the other side of Main Street (or perhaps the other side of the wall created by the elevated Lackawanna) put her in the Lincoln attendance area. Sterling Street no longer exists, apparently a victim of I-280 and/or urban renewal. The map shows the route of a tour of schools and other public facilities, Stockton being #26 on the tour, but the black dot under "Stockton School" is incorrectly placed. The map gives East Orange's estimated population as 82,000.  Census figures show 79,340 in 1950 and 77,259 in 1960,  the actual peak being in the mid-1950's. It has since declined to 64,270 in 2010 about what it was in the late 1920's.
Posted by Jeff S at 11:37 AM