Football At The Orange Oval 1895 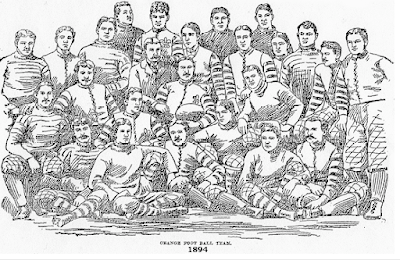 "The game on the Orange Oval, if it shine, brings out all the pleasant life of the Oranges, and drags and traps as far away as Englewood. And if it rain, the men and the girls who keep in touch with the men, come out in macintoshes; and the girls, like the women on the back row of the open stands at the last Yale and Princeton game, half-drowned and seeing nothing but open umbrellas before them , perhaps hope that the fad may change. The crowd follows the game in a way that shows that even the youngest boys in knickerbockers understand how the Crescent left end isn't getting low enough for the interference, or how the Orange "full" is slow in getting away the kicks, and how the umpire is a beast and is giving away the game to the other side. Then when the Orange scores they drawl out in unison that most expressive and typical of slang words "Easy!! Easy!!" And when the Crescent Club scores, then its rooters howl as defiantly as if the bleachers across the fields were the walls of Jericho. When the Orange Club wins, as it did last year, the Orangites execute war dances on the boards of the stand, and perhaps press the hand of the girls next to them with unnecessary warmth (as it seems to the Crescent man passing by). And they all go out through the gates with their heads in the air looking for friends at whom to smile, while the members of the team are being hugged in that crazy fashion that is considered de riguer after football games.
The Orange Athletic Club is a fair type of all the suburban athletic clubs, and those of the smaller cities, that are often social clubs, athletic clubs, and family clubs rolled into one."

"Perhaps many of these clubs give each year a grand ball that is the social event of the neighborhood (as does the Orange Athletic Club), or dances galore, for the athletes are much appreciated at suburban routs [sic] as "stayers," but the real life of these clubs is accurately expressed by saying that they are playgrounds for the grown-up boys of the town."

Note: The rival Crescent Athletic Club was in Brooklyn 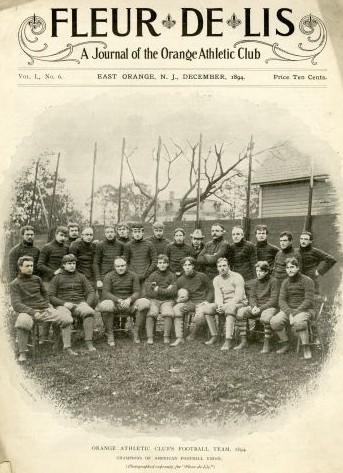