In Fall 1959 the 8th grade was back at Columbian, and at Stockton we 7th graders were finally at the top of the pecking order and were given an activity period with several options for that period. Boys could choose to take home ec, girls could take shop class, we could choose the audio/video club learning to run the sound equipment and projectors in the auditorium under the guidance of Mr Hooper, or we could work on the school newspaper with Miss Betty Ann Boyson as our advisor. Like many of the boys I found the prospect of spending more time with Miss Boyson very appealing so, for me, it was the newspaper.

It was decided that interviewing important East Orange people would make for a good story and the school administration and Miss Boyson arranged for three students to interview the new mayor of East Orange, James W Kelly, Jr. The three of us walked to City Hall and had a sit-down with the mayor and I remember him being very cordial, but I was probably nervous and the only question I still remember asking him was the question that was most important to a 12 year old boy in the 50's: "What kind of car do you drive?"  Yes, embarrassing. If I had really been a budding journalist, I'd have asked "How will you deal with the rapidly changing East Orange demographics?"* But I'm sure he appreciated my softball question and his answer was something solidly middle-class like Pontiac, Oldsmobile, or Buick. The story was written (but made coherent by Miss Boyson) and published i.e. mimeographed in what was probably called The Stockton School News. I remember visiting the East Orange Police Department around that time too and, since I wasn't under arrest, we may have been there continuing our "important people" series interviewing the chief of police. 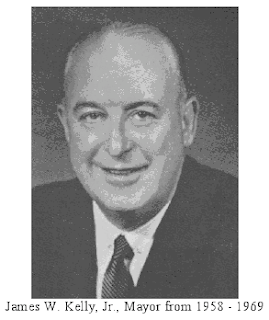