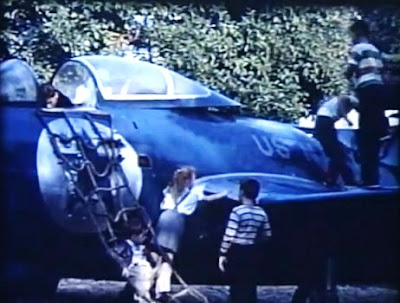 [East Orange] "was THE first in the nation to secure surplus military equipment for its playgrounds. The present director, Graham M. Skea, asked the Navy for a surplus fighter plane. It was granted, if he could  remove it from the depot in Philadelphia. He secured a truck and, with the aid of some of the department’s maintenance men, brought the plane to Soverel Field, where it became the cynosure of eyes all over the United States." (From 1964 Centennial History of East Orange)*

Caption above: "Flying their very own jet plane, East Orange, NJ youngsters swarm over the US Navy jet plane. Cargo net at cockpit helps 'pilots' get aboard." 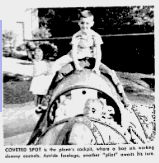 Caption above: "Coveted spot is the plane's cockpit, where a boy sits working dummy controls. Astride fuselage, another 'pilot' awaits his turn." 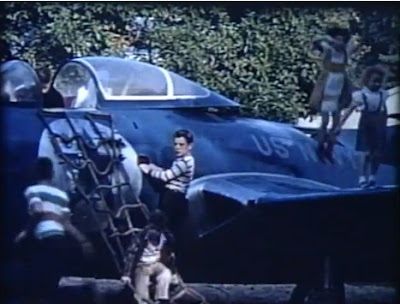 Another person's childhood memory of the jet written on a website  about 2008: "Does anyone remember the Blue F9F-5 Panther Jet that was in a municipal park in East Orange, N.J. circa 1959....? I remember climbing on this jet as a young kid via cargo nets affixed to the ground and leading up to the cockpit. The engine had been removed and someone had poured a fixed concrete "seat" in what was left of the cockpit along with a metal pipe that was fixed to go forward and back representing a control stick. You could crawl from the tailpipe to the intakes without a problem. The canopy was there for a while until somebody stole it or it was removed. You could still read the maintenance instructions on the fuselage. It was there for many years and had been re-painted in silver for awhile. It eventually disappeared: scrapped I suppose. My first memories of a REAL jet fighter!" 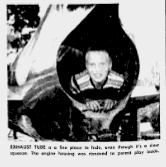 Caption above: "Exhaust tube is a fine place to hide, even though it's a close squeeze. The engine housing was removed to permit play inside." 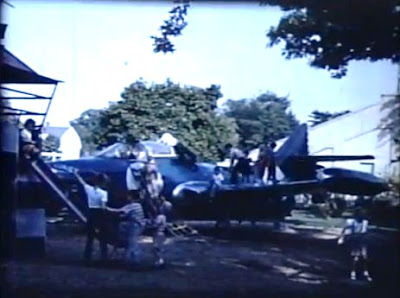 Even though we had almost everything we needed in the Stockton neighborhood where I lived, my best friend, Robert Cunliffe, and I made occasional bike trips to other areas including Soverel Field. Since Soverel had a Korean War era jet fighter ( a Panther** jet) on its grounds, it was well worth the mile bike ride to play on it in the late 1950's. We had no problems with the Soverel kids, but I'm told that the kids there started getting defensive about "their" jet in later years when non-neighborhood kids showed up. 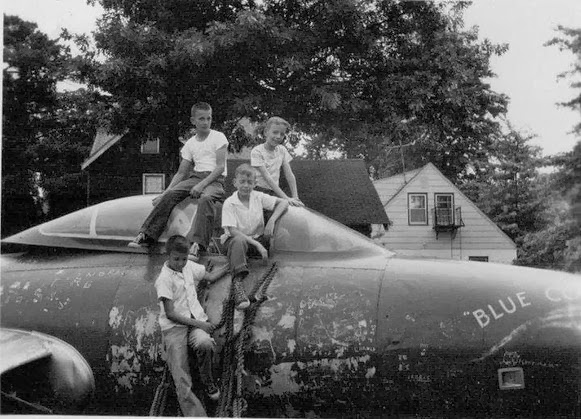 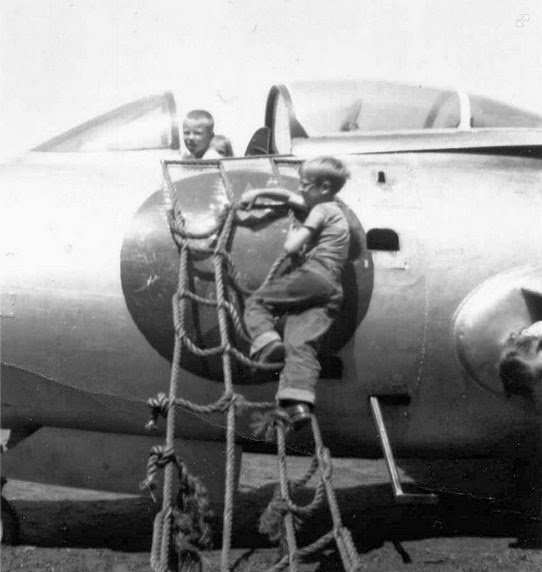 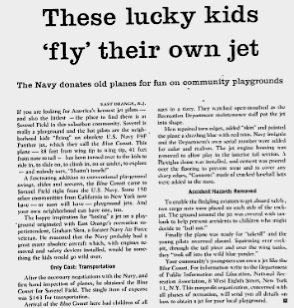 Newspaper article above is on Google News and listed as from a 1958 edition of The Modesto Bee but the word Parade is also at the bottom of the page, so might be Parade magazine.

A short video of the jet by Tony Monica is here on Youtube. 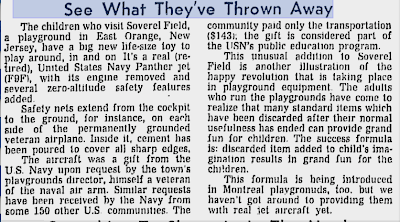 
*This information had to appear as a quote to give me the opportunity to have the word "cynosure" in the blog (cynosure: something that is the center of attention; an object that serves as a focal point of attraction and admiration).


**Panther was that model's nickname; officially, it was a blue Grumman F9F-5 Panther. The Panther was the first jet used by the Blue Angels flight team (1949-1954) and was the most widely used jet of the Korean War. 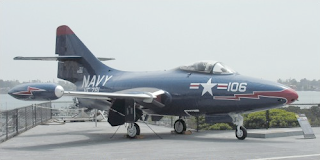 Several former East Orange residents have said there was also a jet in Elmwood Park at some point. It's been described as a F9F Cougar with swept back wings which distinguish it from the straight wings of the Panther. I have not been able to find any photos of an Elmwood Park jet or any mention of what years it may have been there. 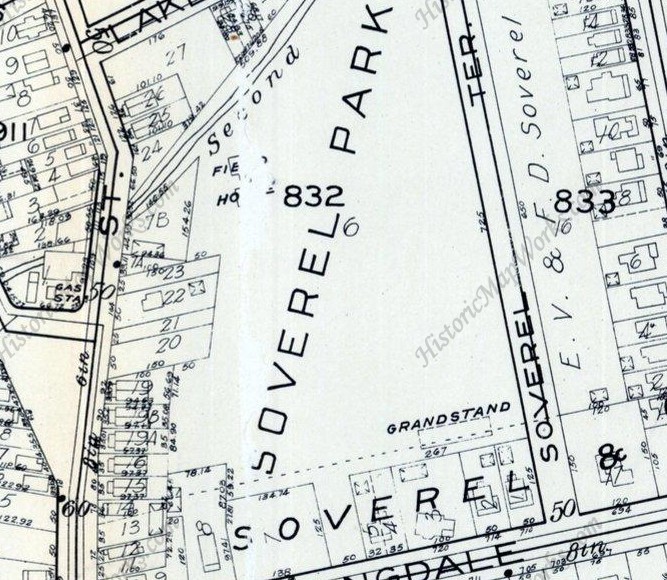 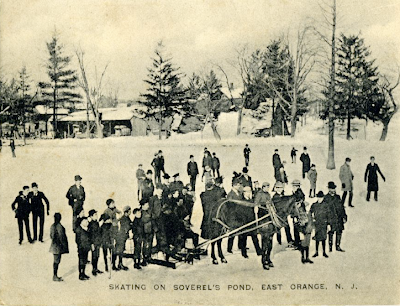