I knew I had been in most Stockton classes with Pat Quinn, but after she was kind enough to send me this photo, I saw no kid who looked much like my other childhood photos, but finally decided that the kid on the left with ears protruding, resembling Opie Taylor was the only possibility. I magnified it a little and saw a clue: "Opie" has a big wound over his left eye. My father had built a brick grill with a ledge around its chimney and at a neighborhood gathering, a "friend" and I were sitting on the ledge; he pushed me off the ledge, I fell on my head, had to get stitches above my left eye and still have a small scar. Identification confirmed and the head injury may explain the dull expression on my face. 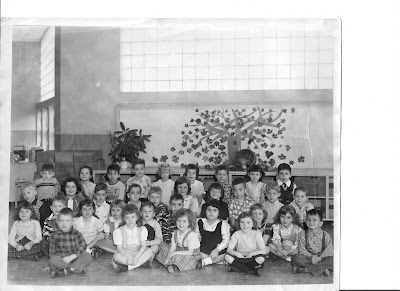 Our kindergarten room was new and state-of-the-art: big, bright, high ceiling, a pretend kitchen with kid-sized appliances, lots of large toy vehicles, unlimited art supplies, and many simple rhythm instruments to play during music time; and we had a wonderful, experienced teacher, Miss Velma Todd, who, early on, was very worried about me and took my mother aside one day to express her concerns: during our free time, when we could play wherever we wanted, I was the only boy who would spend his time with the girls in the pretend kitchen. I don't know what the teacher and my mother said to each other or to me or remember what I said to them but I know what my five year-old brain was thinking: "I'm not that interested in the kitchen, but outside of school I play with other boys in the dirt and run around and climb trees and I have lots of toy soldiers, trains, and trucks at home. What I don't have at home is a bunch of cute girls; I don't want to be a girl, I just like 'em." 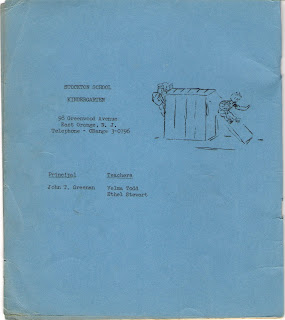 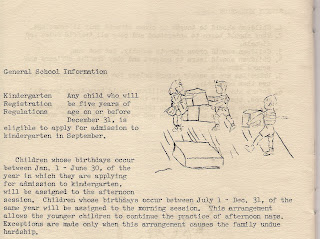 Kindergarten brochure given to parents 1952


Below: One of the new, bright rooms in the 1951 Stockton Annex 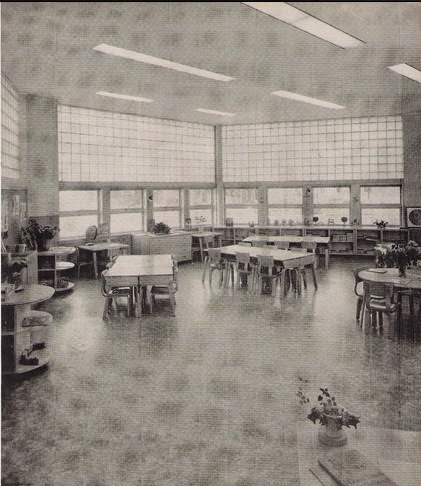