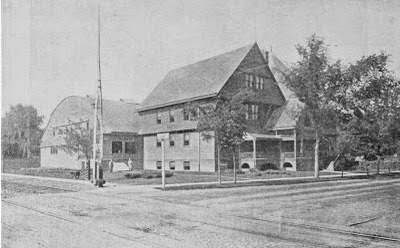 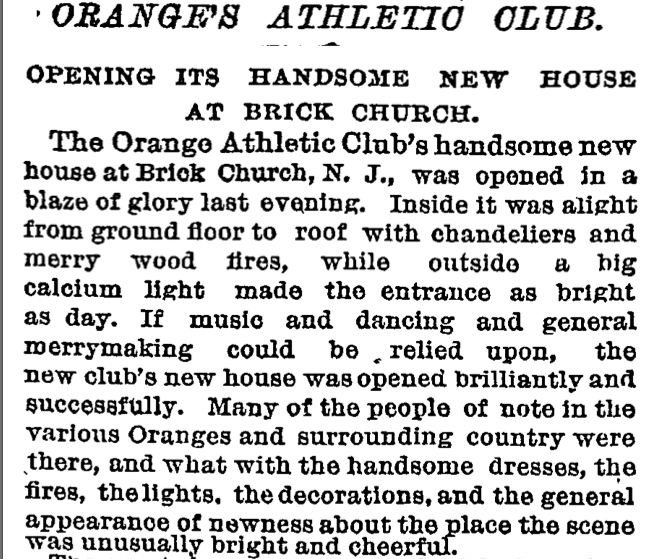 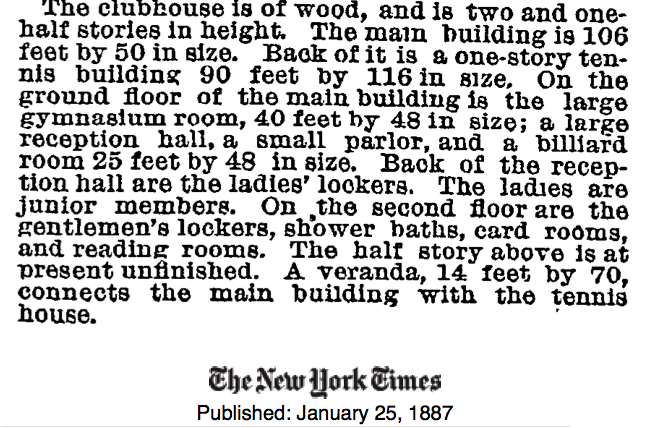 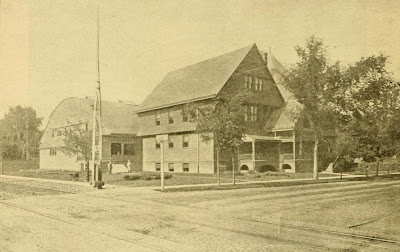 In late 1884 a group of men in the Oranges met one evening each week to bowl at a bowling alley on Main St. Wanting better accomodations and other athletics too, they proposed a plan in February 1885 to start a club. Interest was immediate and by March 1886 they had enough subscribers (in 1889 the club had 581 members) to the club to make it formal and begin construction of a club house at Halstead St and Railroad Ave. near the East Orange Brick Church RR station, the geographical center of the Oranges. The club house of the Orange Athletic Club was completed by December 1886, the tennis building by March 1887. One fifth of the members were women, an innovation at the time (the club house was open to women till 3 PM each day, and all day Monday and Thursday).

Above: Club House fronting on Halstead St. and behind it (left side of photo) the Tennis building fronting on Railroad Ave;  built in 1886/87 near Brick Church RR station. Photo from Outing magazine, Nov. 1889.
Below: 1895 Sanborn map showing Club House with the Lackawanna RR running along side it. 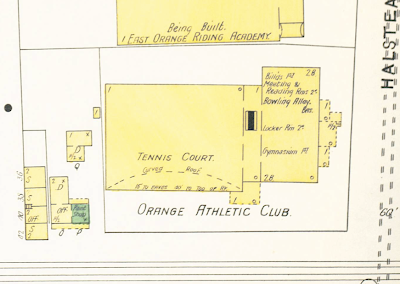 The gymnasium was 41' by 48' with a 30' ceiling and the club house also had a large billiard room and its basement had four bowling alleys. The tennis building was 100' by 110' with a 45' ceiling at its highest point and had two full size tennis courts. There were eight skylights, and after experiments with electric lighting for the courts, gas lights were installed instead and had large overhead and side reflectors to direct the light. 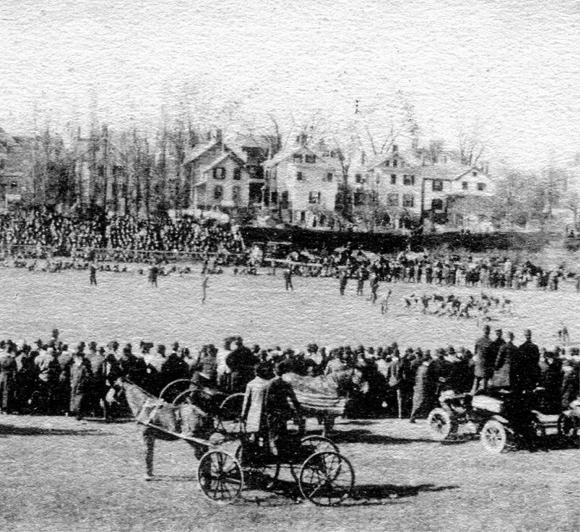 Above: view is looking west; the houses in the background faced Grove Street

The club's athletic field, soon called the Orange Oval, was being developed 3/4 mile away at the Grove Street RR station. The 1895 Sanborn map below shows a baseball grandstand in the SE corner,  football bleachers on the west side, and tennis courts behind the bleachers. (There is a photo of the 1898 state championship East Orange High baseball team on p. 50 of East Orange Images of America by Bill Hart, Arcadia Publishing. The photo view is from the outfield looking toward the grandstand that appears on the Sanborn map) 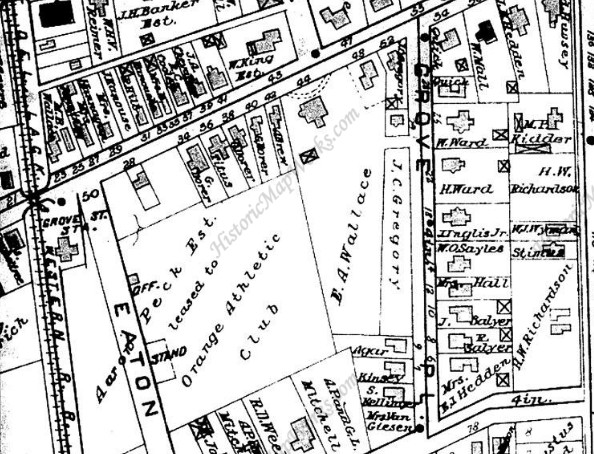 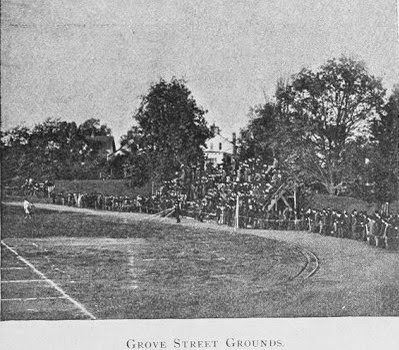 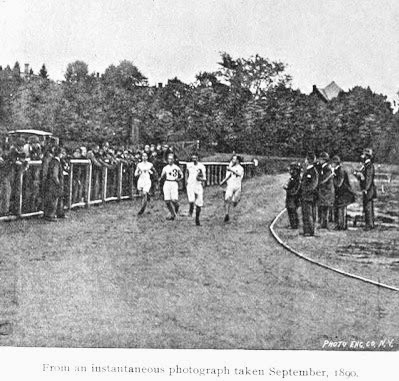 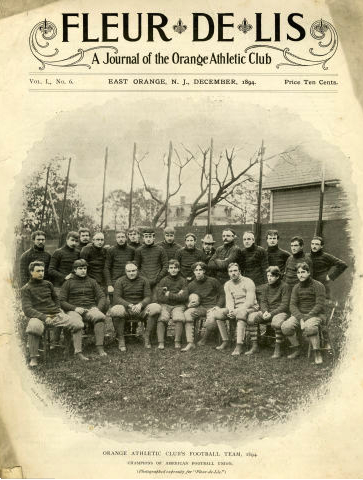 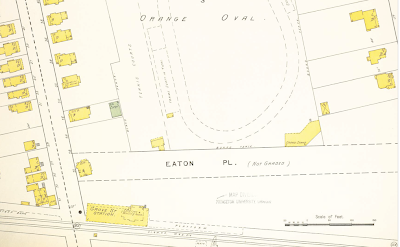 "That it is a misfortune not to have the club house and the ground together is undeniable. However, land in The Oranges along the line of the railroad and accessible to stations is too valuable to be used as an athletic ground except the one plot* the club house [sic, probably should just be "Club"] has secured, and that, as a site for the club house, is too far away from the center of the community to be available or popular in the evenings.

The new ground is a rectangular plot about six hundred by four hundred and fifty feet with here and there a large oak. There is being laid out upon this an elliptical, wide cinder track, five laps to a mile and so laid out as to permit a 150-yard straight-away course on the side. Within the oval is placed the baseball, football, and cricket field, the oval permitting a full-size football field within it. Outside of the track are the tennis courts, ten in number, and archery and croquet will be also provided for. At the lower end of the grounds a grand stand, with a seating capacity of 1200 is to be built as soon as possible. Round the track a wide carriage way will extend, sufficient for 100 vehicles to stand in. Separate openings will give ingress and egress to and from the grounds. The slope of the ground on the west** will be terrraced, and, from this, spectators will have an uninterrupted view of the field. At the north*** end a summer club house will be erected, with dressing rooms and baths. Work has been pushed as rapidly as possible, but delays in draining have prevented the grounds being completed this year."

Information, photo and quoted passage from The Orange Athletic Club by Newell B Woodworth, Outing magazine Nov. 1889, archived at LA84foundation.org

*the "plot" was the Aaron Peck Estate property that would be called The Oval
** the Grove St side
*** the Grove Place side
Posted by Jeff S at 4:38 PM