Starting with 5th grade (1957 for me) we no longer had coed recess with its easy going pastimes ...kickball, relay races, and the like. It was time for the boys' "mettle to be tested" (I think that's what they euphemistically called physical intimidation back then) and it included even those of us who were only 55" tall and 60 pounds. James Oliver was a year ahead of me, but they must have been combining grades in PE class because he was in my 5th or 6th grade PE class. James was a man among little boys. We called him James but we'd probably have called him Mr. Oliver if he had asked. My usual dodgeball strategy was to cower at the back wall till either my team won or till I had to put myself out there at the end to make that desperate try to catch the ball without suffering too much pain. But with James' rocket arm on the other side, the cowering area was pretty crowded and not really out of his range, and when his throw hit you there was some pain involved.

By September, 1963, I had lived in SC for almost four years and was a junior in high school. My physical dodgeball wounds had healed and I had blocked out the scariest memories. A teacher handed out Senior Scholastic magazine one day and there was a familiar face looking back at me from the page, James Oliver, who, according to the article was considered one of the top six football players in the country. "Hey everybody," I said to my classmates, "a few years ago I was a random target for this guy in dodgeball" and, knowing that my short stature, rail-thin "physique," and adrenaline-fueled reflexes had forced him to learn to throw at me with great accuracy, I felt a small sense of pride that my pain had been part of his eventual stardom. 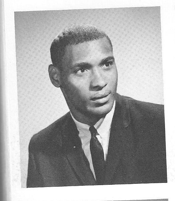 "Jim Oliver, fullback at East Orange (NJ) High School. All-everything in his state and area, 6-2, 205 pound Oliver twists opposing lines into pretzels. Playing in one of the three or four toughest high school leagues in the country, Jim plowed through enemy lines for 875 yards, averaging 5.7 yards per carry and scoring 11 touchdowns.

Blessed with remarkable hands, Jim is used as the holder on extra-point and field goal attempts. He also returns punts and plays the deep position in East Orange's umbrella defense-most unusual for a big fullback." 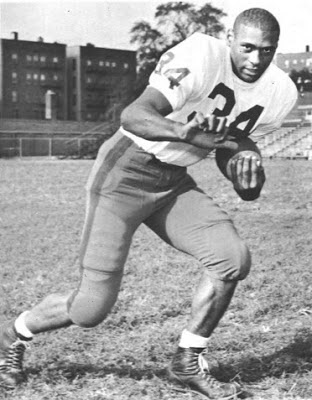 Oliver went on to play at Colorado State University and in 1968 was drafted by the NFL's Detroit Lions.

Above: Oliver as a sophomore in a 1965 Colorado State football program