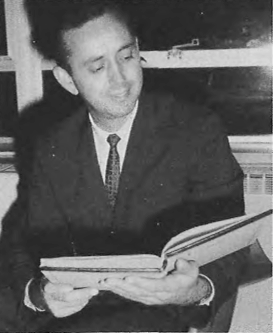 Mr. Leonard Hooper was a teacher in the upper grades at Stockton School from the early 1950's to 1960. He was advisor to the audio/video club (the club ran the projectors and sound equipment around the school and in the auditorium) and he was probably best known for his singing ability, especially his annual performance of "Oh, Holy Night."  Mr. Hooper taught at Clifford J Scott High School from about 1960 until 1975 when he moved back to his home state of Maine and taught in Machias Memorial High School till his death in 2008 at age 80. 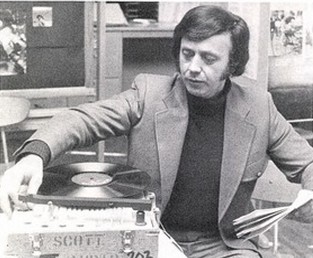 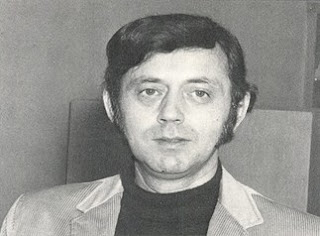 From the Bangor Daily News, 6/6/2010: "The Machias Historical Society agrees with me, having asked longtime English teacher Leonard Hooper to write a book about Machias’ role in the American Revolution.  Hooper turned over the manuscript to MHS and, sadly, died about a month later in early 2008. But the book is a reality, a wonderful piece of Hooper’s legacy.Hooper’s “Machias Patriots and the Margaretta,” illustrated by Patricia Sharp of Milbridge, will be available for purchase at the Machias Historical Society booth on the mall on June 12. The cost is $12 plus 60 cents sales tax."
From the National Writing Project 2003: "This past year, we had several young teachers like Ryan Mahan sharing passion, positive energy, and idealism. But we also had many experienced teachers, including Leonard Hooper, who will be entering his forty-eighth year of teaching this fall. Leonard shared that "I tried to retire three times, and I can't do it. I intend to live to be a hundred and to teach the whole way." Inspiring? Yes."
From the Bangor Daily News ,April,2003:
"Leonard Hooper has something to say to the thousands of Maine teachers who are expected to leave the profession over the next five years. "You might think retirement is attractive, but once you get into it, it's pretty boring," Hooper said during a recent interview in his English classroom at Machias Memorial High School.
Hooper, who is 75, has taught for close to half a century. He tried retiring in 1992. He wasn't any more successful than he'd been in 1976 when he left teaching to pursue another  of his passions. That was the year he returned to Machias after 25 years of teaching in suburban and inner-city New Jersey schools and opened a florist shop with his sister. After just one year, he returned to the classroom at Machias Memorial High School, the school from which he had graduated in 1944. He retired again in 1992, but that retirement didn't stick either, and in 1999 he returned to the high school where he continued to teach until his death.

On the high school Web site, he recently reported that he had completed requirements that would certify him to teach until 2012.
"It's in my blood," Hooper told a reporter in 2003. "I can't stay away from it."

ROQUE BLUFFS – Leonard Nelson Hooper, 80, passed away Feb. 5, 2008, at his home. He was born July 18, 1927, in Machias, the son of Myra (Clark) and Percy L. Hooper. Leonard graduated from old Machias High School in 1944. He served in the U.S. Navy and was a veteran of World War II and the Korean War. Leonard received his undergraduate degree in education from the University of Southern Maine and received a Masters in Arts from Columbia University, New York City. Leonard taught high school English for more than 50 years, starting in a one-room schoolhouse in Perry, before moving to East Orange, N.J., where he taught for 25 years before retiring. Leonard returned to his beloved Roque Bluffs home, where he enjoyed gardening and caring for his family. Not one to be idle, Leonard accepted a teaching position at Machias Memorial High School in 1976, where he taught, until the day he left us. Leonard was born to teach and was a lifelong student. At age 75, he attended the Maine Writers Project, a summer fellowship to foster the teaching of writing in Maine classrooms.

R.I.P. Mr Hooper Facebook page with tributes and a photo

A former student of Mr Hooper is Jeff Zugale who has a webcomic called "Just a Bit Off" and
Zugale honored Mr Hooper with a comic on 2/7/2008 and wrote the following:

"You'll want to be sure your homework is done. Mr. Hooper was just one of the best. Nobody who had classes with him will ever forget him; that resonant voice rings in my head now and then, usually right when I need some guidance. The one thing he always said was a Shakespeare quote:

"This above all, to thine own self be true."

I'm still finding new shades of meaning in that loaded phrase - just as he hinted that we all would.

The world needs more people like him, and is a bit poorer without him." 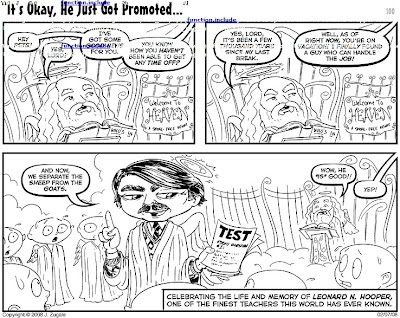 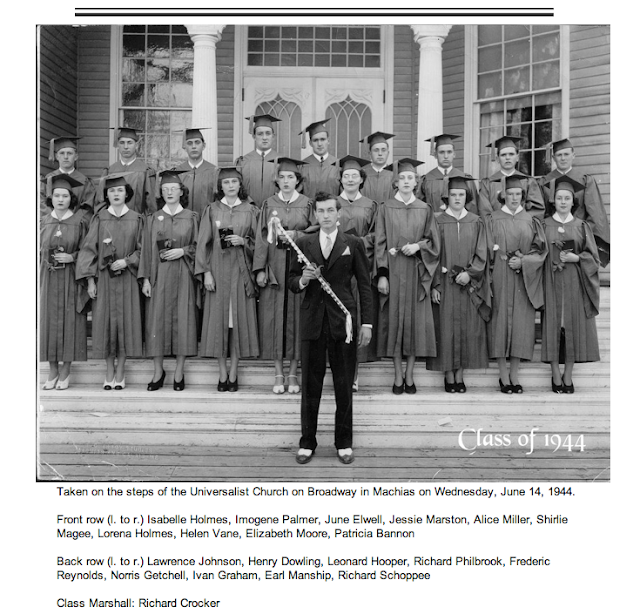 "I went to high school in 1941 while war clouds gathered, threatening our bucolic way of life. Every morning of my life (because I lived on Bruce Street, quite near Machias High School) I looked out my bedroom window to spy the edifice which I knew sooner or later held the key to my success or failure. A twelve-year-old about to enter into a paradise only dreamed about before, with poiunding heart approached the school house door and climbed the six steps to that wide gaping door which I felt held all the answers to the mysteryof life.  But my mother said that college was beyond my expectations, to educate myself for life and hope for the best. The Great Depression barely over, times were hard. I remember those early years of high school when we made one pair of shoes carry us through the summer and fall and winter and into spring. By the time of spring thaw, I was forming insoles of cardboard to keep the slush and water away from the holes worn in my socks to my bare feet. And the coat made of reverse side of fabric of a hand-me-down and sown on the old Singer sewing machine with the foot pedal was threadbare to say the least. So what she said was true: college cost money and it seemed beyond my expectations.

Don't feel sorry for me. I was not alone. Many classmates started out on this new experience knowing that maybe some dreams needed to be deferred, because it was a time when deferred dreams were commonplace.  But just because things sat on the back burner did not mean that the pot would never come to a boil. I didn't know then of the great promise of the GI Bill of Rights which would impact my future. So we plugged along, refusing to admit that success would not be ours.

On December 8, 1941, I was home and in bed in an upstairs bedroom with a case of German measles.  Suddenly, the radio was carrying an address of President Franklin D. Rossevelt to the Congress of the United States asking that it declare war on Japan because of a dastardly attack on our country at Pearl Harbor.  Who had time now to worry about a home in the sole of a shoe?

The war took many young men from our town, some forever. And we were ever mindful of their sacrifices. Every morning the student body of our high school gathered around the flagpole while a chosen student raised the colors and words of remembrance recalled the friends and relatives gone off to fight in far away lands. We saved our dimes and bought War Stamps every Friday afternoon in the library, and by the time the Pearl Harbor anniversary rolled around in 1943 we'd enough money to buy two jeeps. In addition, the town divided itself up into districts, each with an Air Raid Team, and every boy was expected to serve in some capacity usually to deliver messages from one area to another. And afternoons at the end of the school day, boys stood duty at Air Raid Stations, scanning the sky for enemy planes, while girls manned the telephones at the Command Center in the Country Courthouse. It was a time of sacrifice and devotion to our country.

But life went on. Emma Means opened the Colonial Theater on Main Street where every night and sometimes at matinees for a quarter (or was it ten cents?) the latest flicks flashed on the screen.  Barbara Stanwick in Stella Dallas; Bette Davis in Jezebel; and Gene Autry, Tom Mix, and Roy Rogers every Saturday afternoon. Not a seat was empty in the theater as Butterfly McQueen told Vivien Leigh, "Lawsy, Miss Scarlett, I don' know how to birth no baby!"

And there were dances every Saturday night at the Community Hall in Marshfield, never mind that you had to walk home four miles after it was all over.  The jitterbugging, the slow dancing, and the contras were worth the wear and tear on shank's mare. And partners were never a problem, for young and old alike never passed up a chance for a dance to the music of Diddy Hall.

I was sixteen when I graduated from Machias High School. Knowing that college was not in the cards, I asked my parents for permission to enlist in the service of my country. My dad was quite proud, and my mother did not cry. During April vacation of 1944, I boarded the train at the Maine Central Railway Station and headed to Portland to enlist in the service branch of my choice the U.S. Navy. Of course, I passed physical; I was as healthy as a hog. And they said to go back home and wait until I reached the age of seventeen before I could go. I was off to war.

But I was not the ony one. I can proudly say that every young man in that graduating class of 1944 served his country in WWII, just as ten of the eleven young men from the class of 1943 the year before donned uniforms and served in far off lands. Three of them gave their lives for their country in that war, Cecil Day, Hobart MacLaughlan, and George Williams.

I will never forget the day that George Williams and Cecil Day entered the ranks of HERO when on June 6, 1944, they both gave their lives in the Allied Invasion of Europe at Normandy Beach so that all of us might enjoy the great freedoms we have today. I walked the streets of Machias that day, pondering the meaning of it all. I often wonder still where they rest, and do we remember them every year on that day of sacrifice with a pilgrimmage to that spot. Shouldn't we?

So is it any wonder that these men we honor today proudly went off to serve this country in time of war--never being concerned at that moment but that the decision they made was right and good. A few short years before heros were made on beaches at Normandy and on battlefields in Europe and the ROLL CALL OF HONORED DEAD urged them onto duty in the Armed Forces of the United States of America."

Below: from the 1962 Clifford J Scott High School yearbook 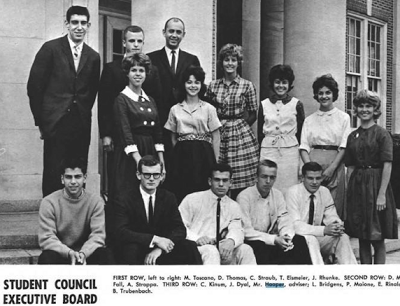 Below:  from 1975 Clifford J Scott yearbook, Mr Hooper's last year at the high school; he was head of the English department. 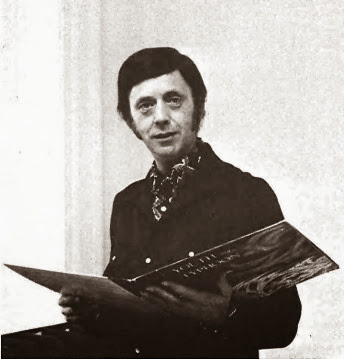