Mr. Charles Jacob Vrooman, born in 1874, (A.B. 1898,  Union College, Schenectady, NY; a member of Psi Upsilon, Theta chapter) became principal of Stockton in 1908 and was preceded by Stockton's first principal, William Hemans Smith. Mr Vrooman graduated from Albany (NY) High School in 1893. A 1906 ad for a teacher/principal employment agency touts its services by writing that a C J Vrooman had been working in Racine, Wisconsin and was easily able to to find new employment in Utica, NY. A 1905 NY school bulletin writes of a Mr Vrooman as principal of Mary Street School in Utica.

Mr. Vrooman was killed in an accident in 1922 as reported by the New York Times in a story with the following headline:

The story reports on various disruptions and accidents due to the storm and includes the following:


Below: from School, a magazine 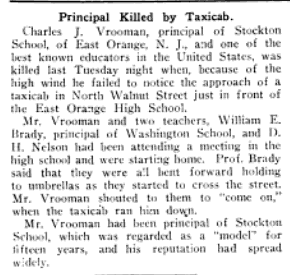 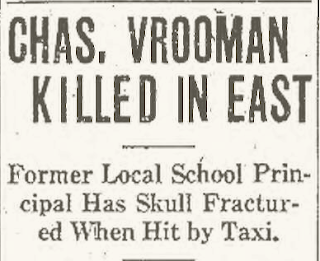 Charles J Vrooman former principal of the Howell School, this city, was almost instantly killed when struck by a taxi cab during a severe storm in East Orange, N. J., Tuesday, March 7, according to information sent here by Phoebe E. Brewer, a former teacher in the local schools, but who is now resident of West New York, N.J.

Mr Vrooman was connected with the Howell School for three years accepting the principalship in 1903 and leaving for the east in 1906. While here he resided at 1635 Twelfth street.

The driver of the machine which struck Mr Vrooman was placed under arrest and charged with manslaughter, the report says.

Hurrying Through the Storm:

The fatality occurred while Mr Vrooman and two other educators were crossing a street during a heavy rain storm. His skull was fractured and his neck broken, and he died before reaching the hospital. The Newark Evening News story of the accident and the developments follows:  "In the rain and wind Mr Vrooman and his companions started through the high school grounds from Winans street with their umbrellas held close for protection. Mr Nester was leading and next came who Vrooman. Mr Brady, who had returned for overshoes, was a considerable distance in the rear.

Mr Nester turned as he reached the far curb and as he did so he saw an umbrella fly through the air and heard the sound of the auto striking Mr Vrooman. The automobile, he said, continued on for about twenty feet before It came to a stop.

The taxi was owned by Richard Cross of 104 Amherst Street and driven by Frank J Little of 1 Jones Street in that city. With the assistance of Mr Nester the driver placed the victim in the taxicab and accompanied by Mr Brady they started for the Orange Memorial hospital. Mr Vrooman died on the way.

A complaint charging Little with manslaughter was signed this morning by Chief of Police William H O'Neill of East Orange who ordered the defendant held for examination tomorrow. In a statement to Chief O'Neill, Little who is twenty years old said that he had not seen Mr Vrooman crossing the street. He stated that he was going about ten miles an hour when he felt the machine strike something and then applied his brakes. Mr Vrooman was born Aug 10 1874 and was a graduate of Union College where he was active in athletics especially football. Before he assumed the principalship of the Stockton School on Nov 30 1908 he was principal of a school In Utica. He was a member of the School Masters club of New York and president of the Educational Council in East Orange." 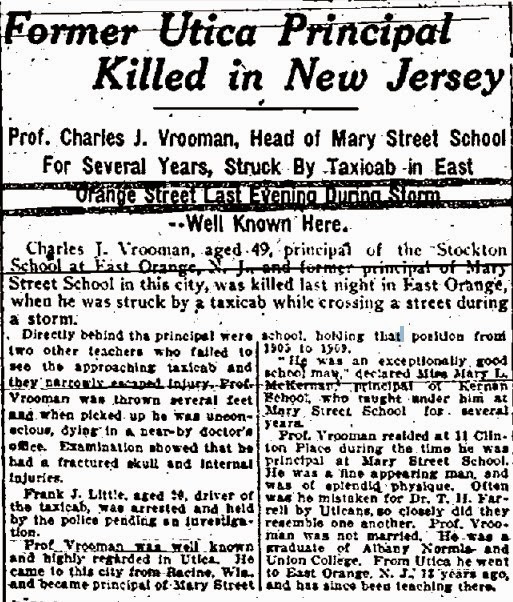 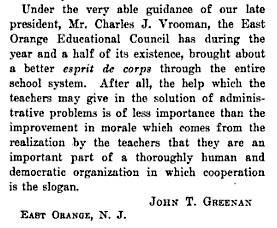 *John T Greenan was a teacher at East Orange High School in 1922 and would be principal of Stockton (and also Eastern School) from 1940 to 1952.