Orange Athletic Club and Its Operation of The Oval:1896 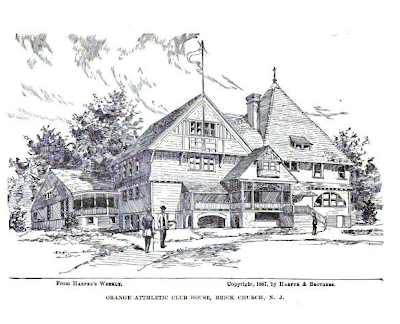 "The Club is the owner of large and well-arranged grounds near the Grove Street station. These grounds contain running tracks and spaces for football and other out-door games. The management and conduct of the games at The Oval by the committees in charge have been so careful and judicious that the entire resident population has come to regard the club grounds as one of its cherished local institutions. Ladies flock to the Club games without escort, and parents gladly permit their children to visit the grounds unattended, confident of respectful care and treatment, and of the absence of the rowdy element which too frequently resorts to athletic games. As a result of these precautions and as a consequence of the policy of management indicated, the audiences at The Oval have been unrivaled as to numbers and character during the past four years, and in these particulars without a parallel in the history of any of its sister organizations. So well known has this feature become that all the other crack athletic clubs are eager to secure dates for games with its teams long in advance of the events, and the leading college teams of the country look forward with pleasure to their annual visits to Orange. The Club is a strictly temperance athletic organization and has constantly sought to afford the best facilities for the instruction and entertainment of its members and friends. It has, year after year, brought a succession of champion athletes to its grounds, in exhibitions as various in character as they have been absorbing in interest. It has, through its junior membership features, brought in a large contingent of the youth of the Oranges, and has exercised a wholesome educational and restraining influence upon them in several directions. Its aims have always been high in whatever it has undertaken, until by its achievements and influence it has become a large and leading element of life in the Oranges, and a power in furtherance of clean and wholesome living and a moral force in the community second only to the body of religious organizations there located."

from: THE FOUNDERS AND BUILDERS OF THE ORANGES:
COMPRISING A HISTORY OF THE OUTLYING DISTRICT OF NEWARK, SUBSE-
QUENTLY KNOWN AS ORANGE, AND OF THE LATER INTERNAL DIVI-
SIONS, VIZ.: SOUTH ORANGE, WEST ORANGE, AND EAST
ORANGE; ALSO A HISTORY OF THE EARLY SETTLERS
FOUNDERS, AND OF THOSE WHO HAVE
BEEN IDENTIFIED WITH ITS GROWTH
AND PROSPERITY, KNOWN AS
THE BUILDERS. (1896)

BY
HENRY WHITTEMORE
Posted by Jeff S at 10:19 AM